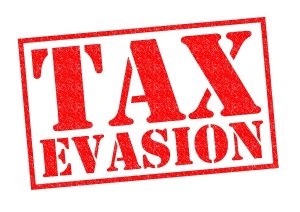 Tax evasion can be shown when the following three elements are present:

Tax evasion and tax fraud go beyond a mere mistake in filing or paying your taxes, and are considered a much more serious offense. Civil tax fraud penalties can be assessed, amounting to 75% of the amount of tax owed. Criminal tax penalties, which can include steep fines and jail time, are also pursued by the IRS Criminal Investigation Division in some cases.

To establish a case of criminal tax evasion, the government must prove the three elements listed above beyond a reasonable doubt.

The Existence of a Tax Deficiency

A tax deficiency can be caused by a failure to report income, understating income, or claiming improper deductions or credits. Of course, if you failed to file a tax return at all, and were required to by law, then you failed to report your income, but that’s a slightly different crime with different penalties.

The government can look at your bank deposits, your business’s books, and other records that show evidence of your income. These will be compared to your return, and any differences—particularly if they are substantial—will be used to show that you owed more tax than you reported.

An Attempt to Evade or Defeat Tax

An attempt to evade or defeat tax can be made in any manner. If you kept two sets of books, made false entries into your books, made false invoices, concealed assets or sources of income, or engaged in any conduct that is likely to mislead or conceal, this element would be satisfied.

Not only can your conduct before and during the filing of your tax return be considered an attempt to evade tax, your conduct after filing the return can fulfill this requirement as well. This is one reason that it’s advised to consult with a tax attorney before talking to a revenue agent during an IRS tax audit if you are concerned about any items on your return.

Willfulness is a voluntary and intentional violation of a known legal duty. The IRS does not need to provide evidence directly showing that you knew you were evading your tax obligation; circumstantial evidence can be used, including evidence of the badges of tax fraud.

The taxpayer can attempt to argue that they were not aware of the legal requirements they violated, or that they relied on a tax professional’s advice when filing their return.

If you are facing tax evasion or tax fraud charges, or if you have been selected for a tax audit and have questionable items on your return, consult with a criminal tax attorney to discuss your case.